As of yesterday, the final volume of Pokemon Adventures Diamond/Pearl/Platinum was released by Viz. With no later releases slated by other publishing companies, this means that fourth gen has drawn to a close.

Of course, we have remakes to anticipate, but that will be quite sone time.

However! I want to get this place hopping again. We've had great fun and I see no reason to stop just because the new material has stopped or because LJ has taken multiple turns for the suck. We're Galactic fans after all, made of the very heart of Mt Coronet and the very fabric of space! We endured utter crap before and prevaled, and we won't be stopped by anything! Viva fourth gen! Viva Sinnoh! Let there be glory for Team Galactic!

Nintendo has announced that it's shutting down wifi for all its DS and Wii games. And that includes DPPt!

Get all your wifi stuff done now! The shutdown is in May, so hurry!

And yes, the shutdown is on the games themselves, so putting a DS game in a 3DS will yield the same results.

A reminder! Viz's release of Adventures DPPt is now up to the Spear Pillar!

For some reason they thought it would be a good idea to intro Saque *here* instead of doing the FRLG arc idk. But this volume is full of Galacticy goodness so don't miss it!

Well ok only one thing. But it's that DPPt Special volume 7 is out! It's the one where they make the assault on the lakes and Jupiter is finally introduced, and there's an awful lot of Charon considering he technically isn't "supposed" to be there (they do the whole "always in shadow or standing behind something" deal).

So would anybody care to have a Galactic-themed chat sometime soon?

Coming back to this comm, I have realized that I haven't talked to most of you in a while, and I don't have many people, especially TG fans, to talk to. I'm not sure if any of you are in the same boat, so I figured that I'd post this to try and get back in touch with those of you who want another TG fan to talk to. I'll try my best to keep my whining about life/the universe/humanity in general to a minimum (think of me like Cyrus, but female and even more bitchy about life if that's even possible... but like Cyrus, I have my good points too), and we'll hopefully get along just fine. To make this post less boring, have a picture of Sim!Saturn writing about gnomes. 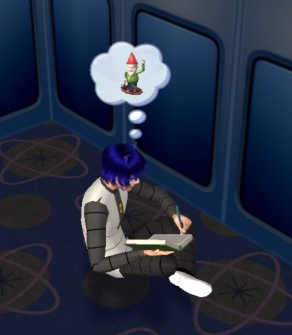 Oh wow ok. So I just had to deny a spambot access to the comm.

It's a bit silly to think about. Why would a spambot target a Team Galactic comm?

...So either Rotom is playing pranks on us or this is some sort of Adventure Time-esque effort on Cyrus's part to communicate with the real world from the Distortion World (though of course to him "the real world" is a vastly different world than what you and I inhabit).

Well come on I had to make it TG related SOMEHOW, didn't I?

Wow, does anyone still actually visit LiveJournal?? WHATEVER, IT DON'T HURT TO PIMP OUT HERE TOO I GUESS.

Anyways, I just started up an askblog for Charon and Rotom over on Tumblr. For those unfamiliar with askblogs, it's basically like a combination of RP and artwork prompts; that is, folks ask the characters questions and I draw some IC/incredibly silly answers. Anonymous is enabled, so you don't need a Tumblr to heckle 'em.

If there's any other Galactic-related askblogs that you know about, be sure and pimp 'em here too so they can get a little love!

Due to some massive owies, I have no cover art, and I couldn't find anything for B-2 or Io, but after this long I didn't want to wait any longer! So why not post it on Cyrus Appreciation Day?


Plus bonus tracks! See if you can determine their meaning!
Collapse